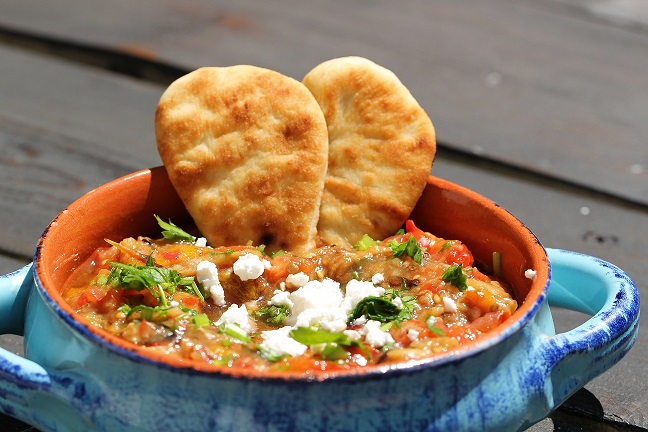 This is a very easy, quick and delicious recipe for this dish. Fans of Arabic, Mediterranean and Balkan cuisine know well and love it .Eggplant is often stewed, as in the French ratatouille, or deep-fried as in the Italian parmigiana di melanzane, the Turkish karnıyarık, or Turkish, Greek, and Levantine musakka/moussaka, and Middle Eastern and South Asian dishes. Eggplants can also be battered before deep-frying and served with a sauce made of tahini and tamarind. In Iranian cuisine, it is blended with whey as kashk e bademjan, tomatoes as mirza ghassemi, or made into stew as khoresht-e-bademjan. It can be sliced and deep-fried, then served with plain yogurt (optionally topped with a tomato and garlic sauce), such as in the Turkish dish patlıcan kızartması (meaning fried aubergines), or without yogurt, as in patlıcan şakşuka. Perhaps the best-known Turkish eggplant dishes are imam bayıldı (vegetarian) and karnıyarık (with minced meat). It may also be roasted in its skin until charred, so the pulp can be removed and blended with other ingredients, such as lemon, tahini, and garlic, as in the Arab baba ghanoush and the similar Greek melitzanosalata. A mix of roasted eggplant, roasted red peppers, chopped onions, tomatoes, mushrooms, carrots, celery, and spices is called zacuscă in Romania, and ajvar or pinjur in the Balkans.

A Spanish dish called escalivada in Catalonia calls for strips of roasted aubergine, sweet pepper, onion, and tomato. In Andalusia, eggplant is mostly cooked thinly sliced, deep-fried in olive oil and served hot with honey (berenjenas a la Cordobesa). In the La Mancha region of central Spain, a small eggplant is pickled in vinegar, paprika, olive oil, and red peppers. The result is berenjena of Almagro, Ciudad Real. A Levantine specialty is makdous, another pickling of eggplants, stuffed with red peppers and walnuts in olive oil. Eggplant can be hollowed out and stuffed with meat, rice, or other fillings, and then baked. In Georgia, for example, it is fried and stuffed with walnut paste to make nigvziani badrijani. Eggplant is very often use in so many different cuisine and I think is one of the most delicious and not boring veggies you can prepare in so many different ways. This dish I am sharing with you, can be use as a dip, side dish or a main course dish. It is prefect for vegetarians and its perfect durring the hot summer days.

Wash and clean the eggplant and peppers. Peel the tomatoes and cut them into small cubes. Minced the garlic. Cut into halves the eggplant and with a knife make a small holes and stuffed a few garlic cloves, drizzle with olive oil, salt and black pepper and bake the eggplant and peppers in the oven on 425 until they have a nice golden crust or until ready. Put them in a bowl and cover tightly with a lid or foil to soften. Leave for about 10-15 minutes. Then peel the flakes of the peppers and the with a spoon, scoop out the eggplant from his skin. Cut into cubes. Using a blender, pure the eggplant. In a bowl add the eggplant, tomatoes and peppers, minced garlic, salt pepper, parsley, lemon juice, olive oil and mix them very well until they are relatively smooth. Sprinkle more fresh parsley and feta cheese on top. Serve at room temperature with grilled bread.

This post may contain affiliate links. Please read our Disclaimer for more info.