Bolognese sauce known in Italian as ragù alla bolognese, ragù bolognese, or simply ragù is a meat-based sauce in Italian cuisine, typical of the city of Bologna. It is customarily used to dress tagliatelle al ragù and to prepare lasagne alla bolognese.

Genuine ragù alla bolognese is a slowly cooked meat-based sauce, and its preparation involves several techniques, including sweating, sautéing and braising. Ingredients include a characteristic soffritto of onion, celery and carrot, different types of minced or finely chopped beef, often alongside small amounts of fatty pork. White wine, milk, and a small amount of tomato paste or tomatoes are added, and the dish is then gently simmered at length to produce a thick sauce.

Outside Italy, the phrase “Bolognese sauce” is often used to refer to a tomato-based sauce to which minced meat has been added; such sauces typically bear little resemblance to the Italian ragù alla bolognese, being more similar in fact to the ragù alla napoletana from the tomato-rich south of the country. Although in Italy ragù alla bolognese is not used with spaghetti (but rather with flat pasta, like tagliatelle so-called “spaghetti bolognese” has become a popular dish in many other parts of the world.
Nowadays, there are many variations of the recipe even among native Italian chefs, and the repertoire has been further broadened by some American chefs known for their expertise in Italian cuisine. Here is my take on this classic Italian dish. 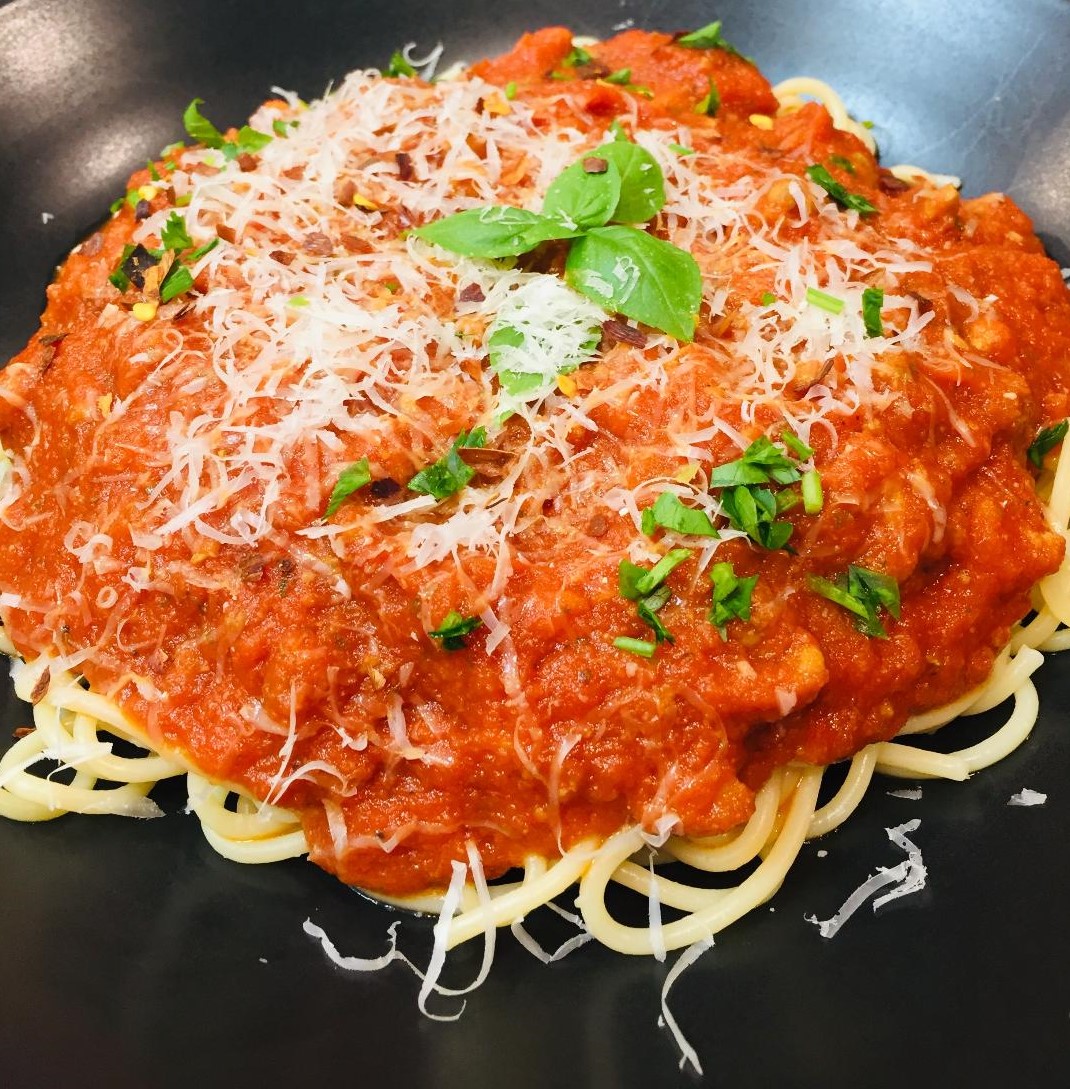 To make the Home made Bolognese Sauce:
In a Dutch Oven heat 5 tablespoons olive oil and add the ground pork and veal and brown it for a few minutes. Take out the meat and put it a side. In the same dish, put the chopped onion, carrots, celery and sauté for a few minutes, add the minced cloves of garlic and leave to sauté for about a minute or two. Put the tomato paste and cook for a 30 seconds, add the red wine and stir occasionally and the alcohol from the wine evaporates. Add the crushed tomatoes, ground meat, chicken or beef stock and then add the seasoning. Leave to simmer for about 2-2 1/2 hours and stir occasionally over low heat or until the sauce is reduced in half and thickened. A few minutes before you remove the sauce add the heavy cream if you want more creamy texture of the sauce (it is optional, I don’t use cream every time I make it.) After the sauce is done add a 1/2 cup of Parmesan cheese. Season with fresh chopped parsley.

Preparation of the Pasta:
In a boiling water add a pinch of salt and a tablespoon off olive oil and put the pasta of your choice to cook until al dente- 2 minutes less then the package instructions or the way you like to be cook. If you a preparing fresh one you need to cook it for 3 minutes. Drain the pasta and serve it individual portions or for family style add it to the already sauce and stir carefully to incorporate the sauce.
Garnish with more parmesan cheese and fresh basil and parsley.

You can open a nice bottle of Monteti- Monteti 2014.
Bon Apetit!

Equipment you may find useful:

This post may contain affiliate links. Please read our Disclaimer for more info.